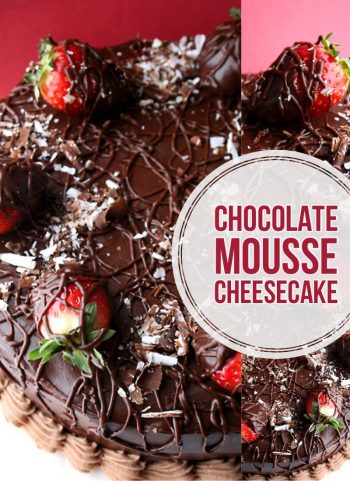 I do still know how to bake.

Perhaps you thought I had given up on it, considering it’s been a while since you saw me make anything other than a cookie. I DO still know how to bake. 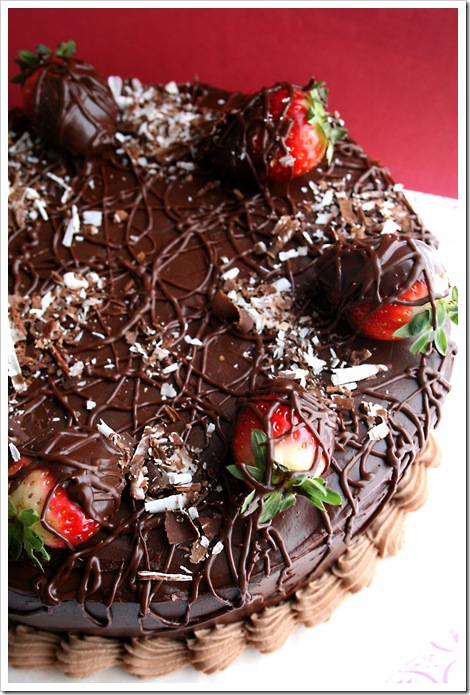 Take this cheesecake, for example.

Oh how I wish I could show you the inside of it, but it was an order for a restaurant, and alas, I don’t think the owner would have understood my desire to photograph all of my food. My husband barely understands it, but after nearly two years, he’s getting used to the fact that dinner must wait until the pictures are taken. I’m sure it’s not something he ever considered when he said the ol’ “’til death do us part” speech, but, you learn to live with things, I guess. At least he gets fed.

For those of you who must have a graham cracker crust to enjoy a cheesecake, you’ll be out of your element here. This is a cake, not a pie. Cheesecake can be either, or a great combination of both. In fact, I’m not sure which it officially is: cake or pie? Because I like to answer my own questions, this one is a cake. A CAKE.

The bottom layer is all cheesecake. Tall, thick, creamy goodness. You’ll make this layer in a regular cake pan, not a springform. I find it much easier to deal with, as you don’t need to wrap it in aluminum, there is no water getting into it because of leaky aluminum. Just nice, perfectly baked cheesecake. Once it has cooled in the fridge for several hours, you can just shake it right out of the pan, easy as that.

Now it the time to get out the springform. Take the newly released cheesecake and place it in the center of the springform pan. Pile it full of this rich, decadent chocolate mousse. Make sure you get it down the sides of the cheesecake, too, all the way to the bottom. Pile it high, to the top of your pan if you have enough of it. Now freeze it. Yep, just toss it in the freezer for a couple of hours. 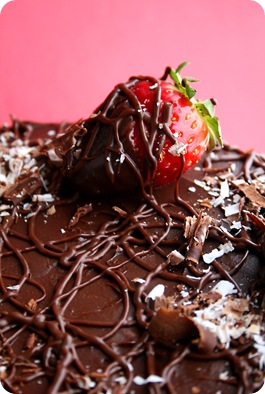 While it’s chilling, make some chocolate ganache and have it ready and waiting. You can even hurry the ganache along by placing it in the freezer for about 15 minutes (no more) if you want…just make sure it is thick and cool (not warm and not frozen). Then, when you pull the frozen mousse cheesecake out of the freezer, you’ll have an easy time of icing it with the ganache. The point of freezing the cake is so that the ganache will stick to it easily and without incident. It will help to start in the center and work the ganache out and then down over the sides. Yes, it’s a little more difficult than icing with buttercream, but it’s really not tough. Hey, if I can do it, anyone can.

The decorations are up to you! For me, I went grand. I dipped a few strawberries in some of my extra ganache, then placed them on top. Then I bagged some of the ganache, zapped it for 5 seconds in the microwave, and piped swirls all over the top. Finally, I piped a chocolate fudge border around the bottom to neaten it up, although you could easily add some powdered sugar to you left over ganache and whip it to make a nice icing thick enough to make a border with. Or you could leave it plain. Or you could make a few chocolate curls/shavings (like I did for the top out of dark & white chocolate)…the options are endless.

Final piece of advice – make sure this cake is very cool before trying to cut it. I used floss to cut nice, clean pieces, but you could use a thin sharp knife as well.

Or, just sit down with a fork and dig in.

Add gelatin to cold water in heatproof bowl and allow to thicken, around 1 minute. Place thickened gelatin in microwave for 30 seconds, stir, then return to microwae for additional 20 seconds. Remove and allow to cool.

Whip the cream on high speed until soft peaks form. With mixer running, add in sugar and vanilla. Then add in cooled gelatin. Do not overbeat.

Add in chocolate and mix until all white streaks are gone. Chocolate should be room temperature, not cool. If it is too cool, the chocolate will flake when it comes in contact with the cold cream.

Chill mousse until ready to spread onto your cheesecake.

Spread the love
oooh la la I was *this* close to being a Winter Olympian. Except it was summer. And I mix things up sometimes. Okay, well, a lot.