There’s a huge movement going on that I’m sure you’ve seen – The Tiny House Movement.  People from all walks of life have taken on the task of building (and living in) small spaces they’ve constructed – be it converted campers, or stick built framed houses on moving trailers, converting shipping containers into homes, treehouses, cabins, and more.

I became a part of this phenomenon last year.  Or this year.  Both.  Let me explain. 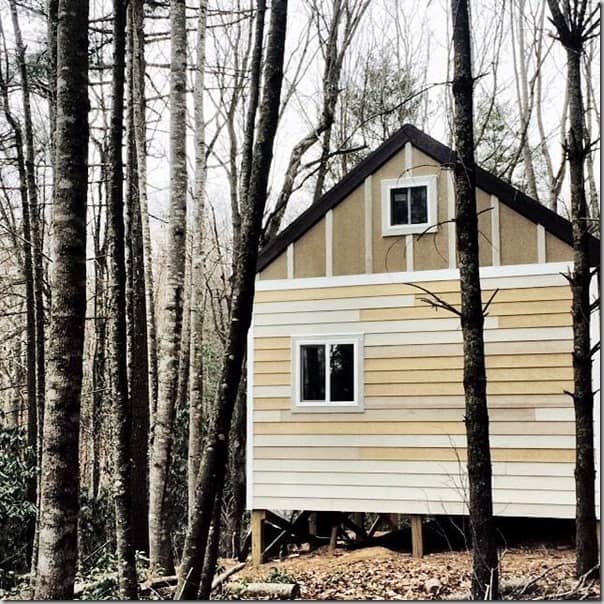 Several years ago – about 15 or so, I guess – my father bought a large plot of forested land in a neighboring county, so that he would have a place to hunt.  250 acres, which he dubbed Camp David, is a gorgeous piece of land about an hour from my house, and a place we rarely visited over the years.  It has a stunning spring fed pond, stocked full of trout and bass, a few catfish, and on occasion, a duck or two.  We camped by the pond a few times over the years, but it was rare.  My dad has talked all this time about building a house where all of us could go to stay, but like so many things in life – things out of sight stay out of mind.  It happens. 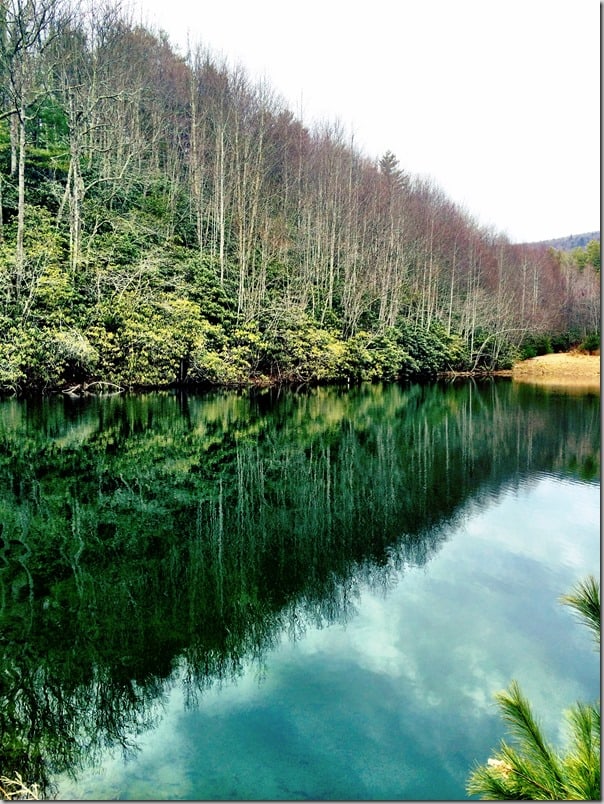 Me?  I wanted a treehouse out there.  One large enough to stay the night in, with a few comforts of home.  Nothing huge, just comfortable, and inviting.  Something modern enough that I, a total indoor girl, would feel safe and secure in over a long weekend.  But…money wasn’t something I had in the past, and having a young son, a busy schedule, and lack of cash are all obstacles when it comes to something considered a vacation home. 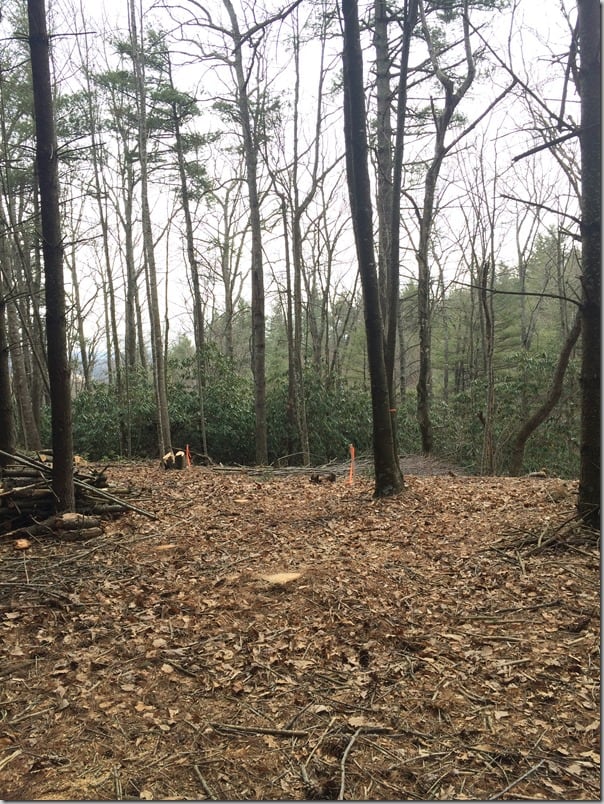 Onto the backburner it went.

Until last winter, that is. Around February of 2014, I realized I had enough money put aside that I could start building something for us.  After a weekend drive to the property to scout out a good location, some ideas came together and I got out the graphing paper – my go to when it comes to any designing.  Instead of a treehouse, which would have been much more complicated to build by ourselves, we opted to build a raised cabin, deep in the woods, surrounded by pines and the thickest grove of mountain laurel and rhododendron I’ve ever seen. 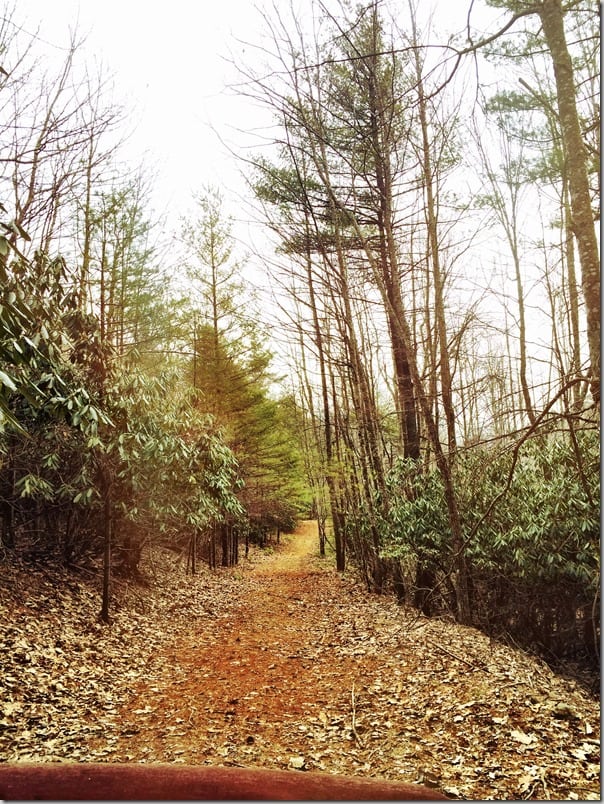 The cabin originally was going to be VERY small…10 by 12, with a small sleeping loft. I knew Jon could build this – he managed a similar size in our back yard as a shed.  But me, being who I am, push the limits of what I am allowed, and somehow convinced him (he’s not a carpenter, designer, construction worker or architect) that he could hand build a cabin nearly twice that size.  16 feet by 24 feet, with a bedroom loft.  A loft actually bigger than the original house size. Giggle. 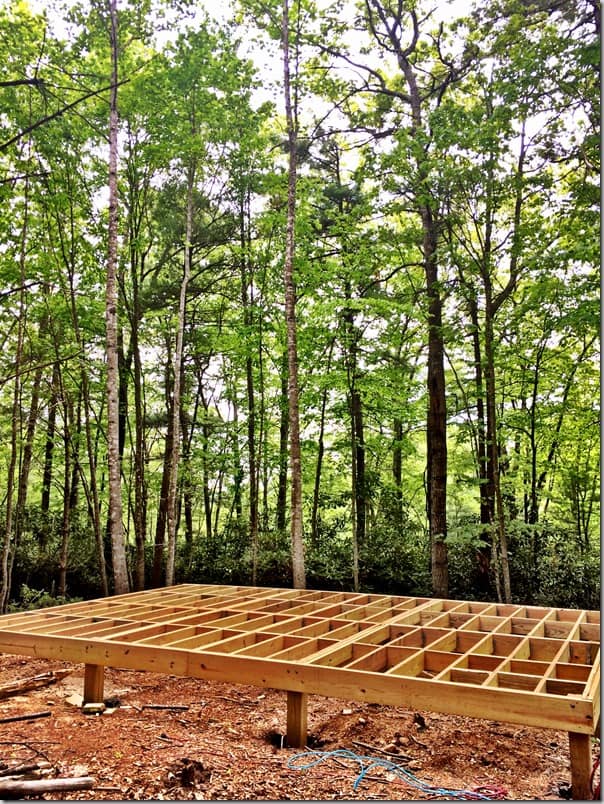 To my surprise, after the design was drawn on my graphing paper, Jon shared it with some of our architect friends to determine any structural needs, and within just a couple of weeks, the plot of land was cleared, and Jon and his surveying coworkers and friends were digging footers (by hand), pouring concrete, flagging just about everything, and laying the framework to what would be our future family getaway. 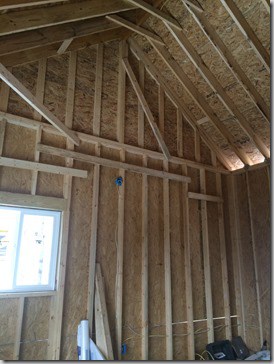 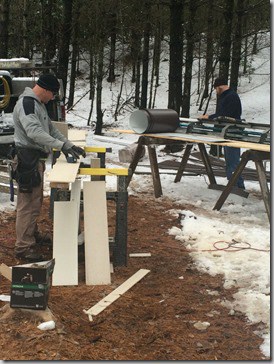 Jon did all of it, working weekends, and friends new and old pitched in to make it all come together.  My brother in law, a contractor, came up a few times from Richmond to help with the big things – getting the walls up and the structure under roof, setting windows, and siding (which is his niche). 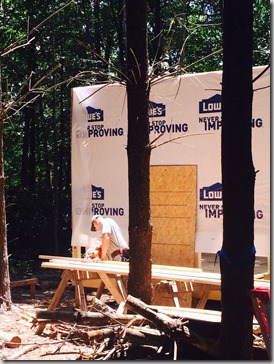 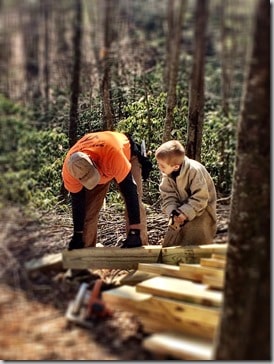 We have no electricity, other than a generator, but I am prepared for the future.  So, my dad did the wiring, pulling out his trusty handbook that has seen its better days, and Jon ran the gas line and will run the plumbing once we get that far.  I did the insulation (really!) and helped here and there as I could, but mostly, I am about the decorating and finishing.  I’m really good at shopping.  I did help lay the floating floor, and I also aged the cabinetry and any other wood that needed to look aged, which was a lot of fun.  The only thing we hired out, which I did as a Christmas gift to Jon as I knew he was stressing the idea of it, was the drywall.  Imagine having to hang drywall deep in the woods, where there is NO ROAD, NO ELECTRICITY, and NO WATER. 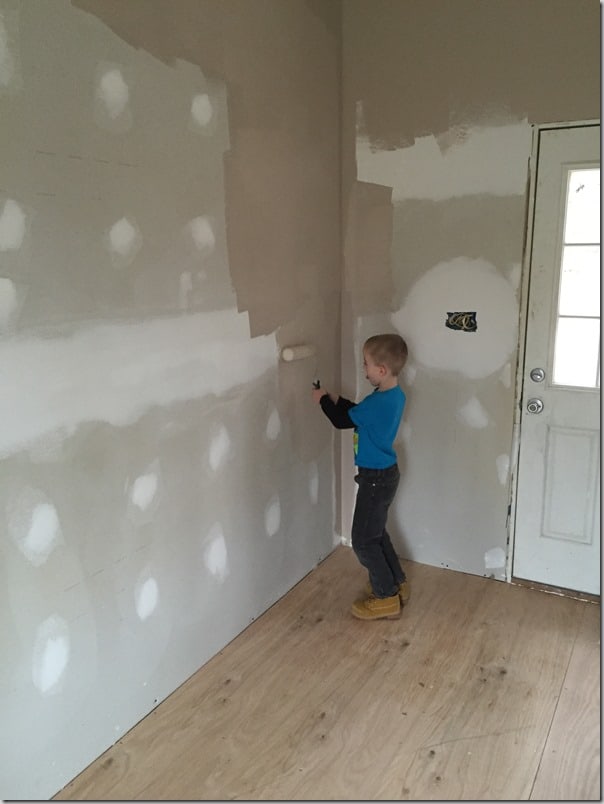 A great guy brought a crew out and hung and finished the drywall in 5 days, and that one thing totally made the idea of a house become a REAL house.  Since then, we’ve stayed there nearly every available weekend, doing one project after another.  I’ll be writing posts to show you several of the projects, and even though we aren’t done, I wanted to show you how this little gem is progressing.  I absolutely love it, and I am shocked at how little it has cost.  Including all furnishings, all decorations, and everything from nails to siding, we are somewhere around $11,000.  Maybe a little less.  But you could totally LIVE there.  My bedroom is a terrific size, the Kitchen/Living Room is just big enough, and Seven’s sleeping loft is a great size.  We can sleep 6-8 with no problem, and it’s a house full of light and fun.  I hope you think it’s as awesome as I do! 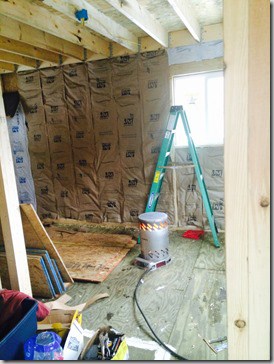 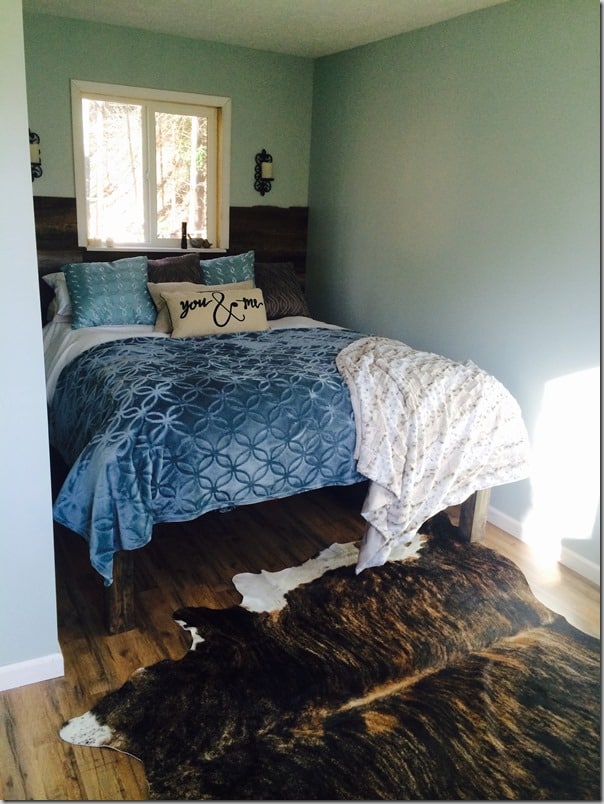 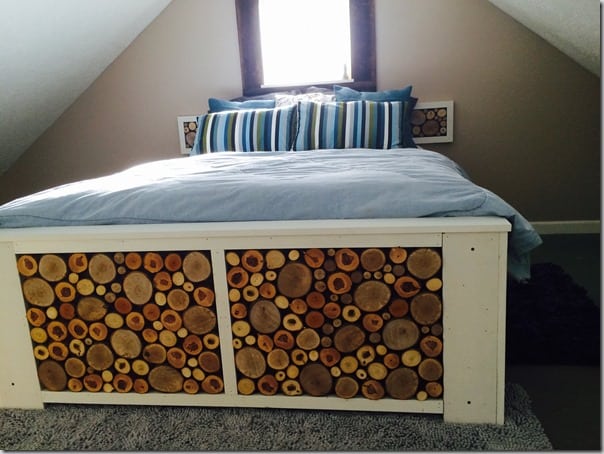 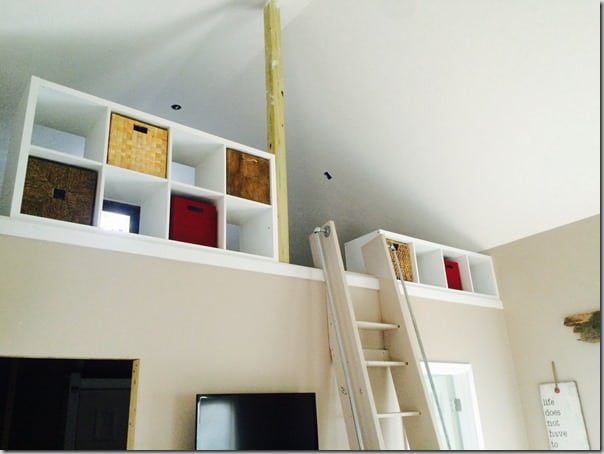 Stay tuned for more posts on my Tiny House…I’m hoping to show you how the beds were made (especially that “stacked wood” looking version above), as well as the master bedroom bed/wall, the aging of the kitchen cabinetry, and a few other projects we have had going.

Anything you want to see? Know?  I’d love to hear your thoughts so far!

(Oh, and how is this for a back yard view from my sliding glass door?)

Thanks, y’all for stopping by!