If you are ever in France, especially anywhere near Normandy, you should definitely consider a day trip to Mont St. Michel. Mont St. Michel has been on my radar for as long as I can recall – it seems like maybe I first saw photos in my art classes in college over 20 years ago. A majestic cathedral, towering above the sea, on a mountain surrounded at times by the ocean. It makes little sense, how it could be there, all alone. How it managed to come about, and how it survives the elements the way it does. 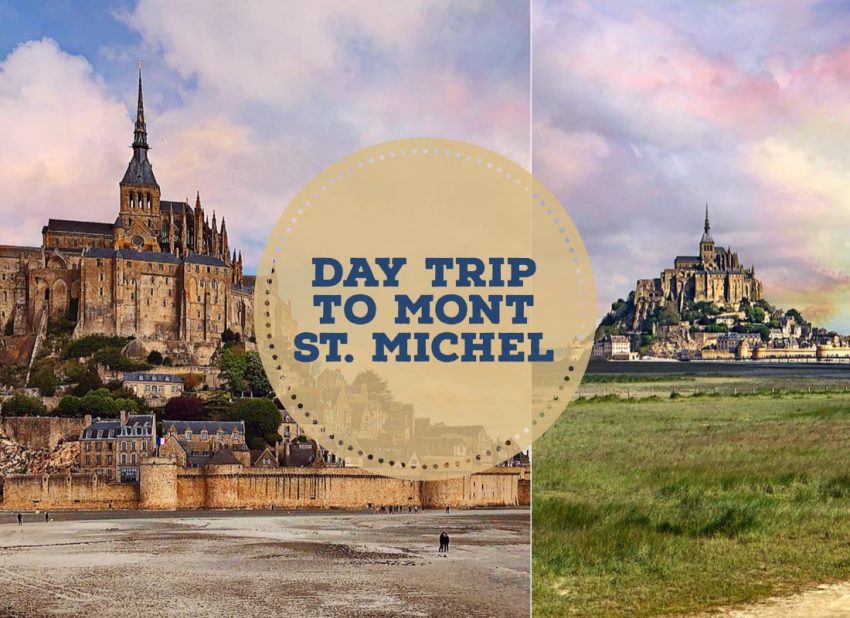 Rust and I made the day trip from Bayeux, a gorgeous little town in Normandy only about 90 minutes from Mont. St. Michel. I had found a shuttle van online that would have taken us from Bayeux for only 60 euros, but one day while strolling through town, we stumbled onto a local tour company and decided to just book in person. For 70 euros each (that’s about $80), we booked a round trip shuttle from town, as well as skip the line tickets to the abbey, the star of the island. We didn’t really know what to expect, other than we knew the van left at 845am, and that it only held about 10 people, which we liked. Too many people crammed into a van is never a fun idea! 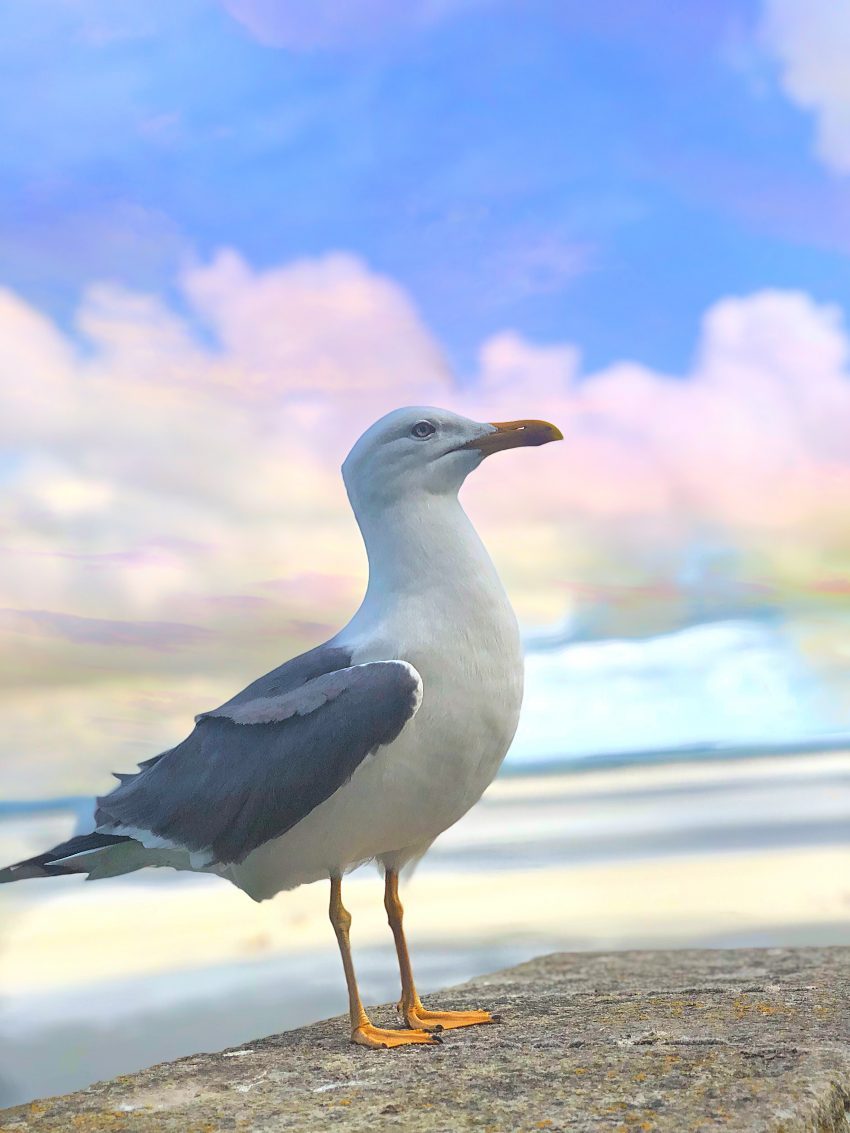 On the morning of our tour, we showed up at the meeting point, and were soon greeted by a very nice, very large van (tall enough to fully stand up in), complete with television to keep us informed on our mapped whereabouts at all times. The driver never spoke during the ride, only kept his focus on the road and let the GPS activated television entertain us with facts about the towns we drove through.

An hour and a half later or so, we could see Mont St. Michel in the distance, and even though I knew what it should look like, I don’t think I was fully prepared for what it REALLY looked like. It is stunning – a true marvel – and I couldn’t wait to get closer. 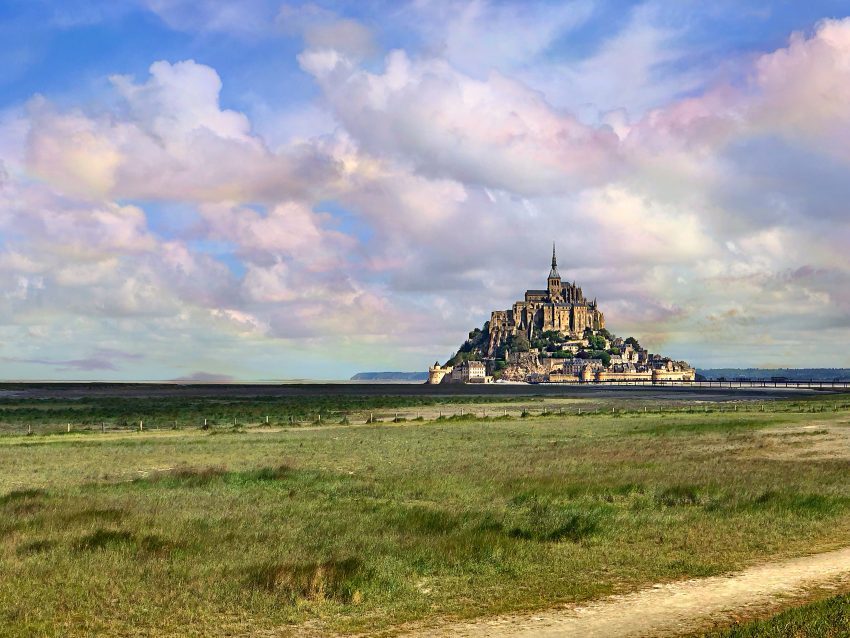 The parking lot for all of the cars and buses is nearly two miles from the actual island, something we never really considered. How are you supposed to get over there?? Well, you have options.

The first option is a bus. Just hop in line, and every few minutes, a bus will appear and load about 40 people on and carry you over to the foot of the island. The bus is free, but crowded, and we decided agaist waiting on it for the ride over. Another option is a horse drawn carriage. The carriage takes about 45 minutes. I’m not sure the cost, but it seems like it was about $10 per person. Being on a bit of a time crunch, we opted to just walk the two miles, across the bridge. Many, many people chose this option as well. There’s just something about that walk, making your way to the island, that makes it feel like something you should do to fully appreciate it. 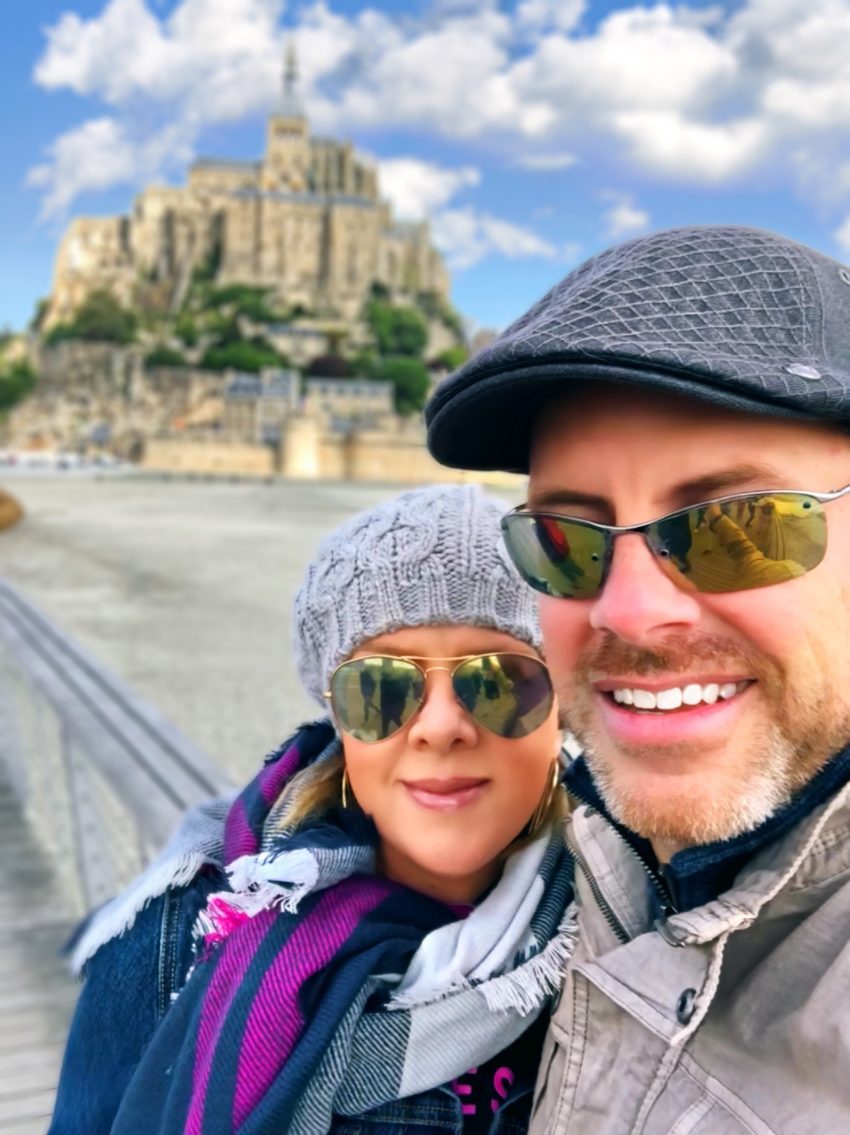 It took about 35 minutes, with stops to take photos. We weren’t rushing, it was too pretty to rush. In the distance, “pilgrims” were led by tour guides to walk across the sea floor, the true way to make the pilgrimage. Not for us! It was blustery, and the air pretty cold, so I imagine bare feet in the wet sand had to be frigid! I think it must be a very cool experience, I’m just pretty sure it’s not an experience I need! 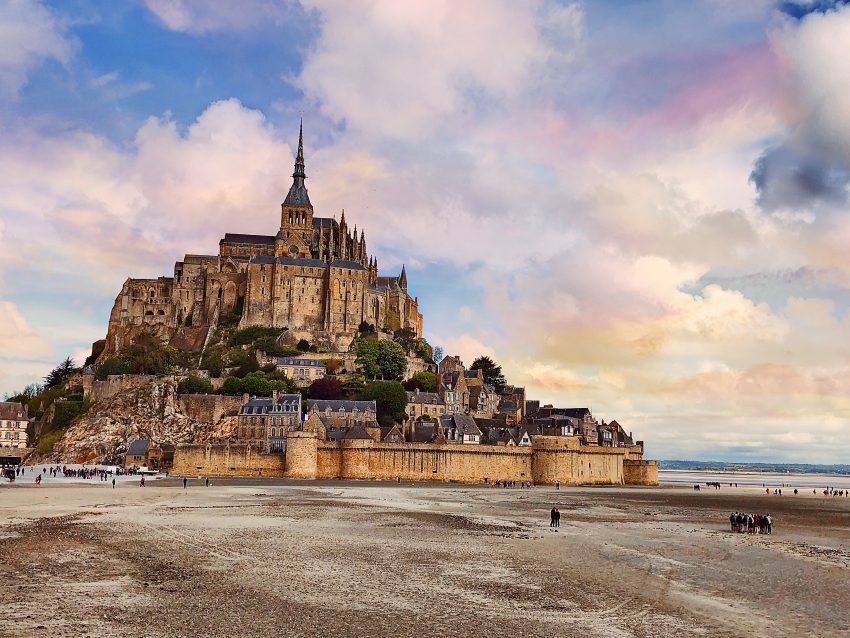 Once we got to the entrance to town, we entered the walls and started winding our way up the steep streets, towards the abbey. While the passageways are narrow and congested, you don’t need to fear getting lost. The street goes one way – up! – and is only pedestrian. On each side of you are shops and restaurants, and a few hotels. We stopped and had lunch at a quaint little café, but there are full on gourmet restaurants if you are so inclined! We also stopped to shop for our souvenir, a Christmas ornament. We always try to buy an ornament from every place we go, and it’s become one of my favorite things about our travels. Finally, we found one, though I was getting worried after stopping into half a dozen shops and not seeing anything at all! 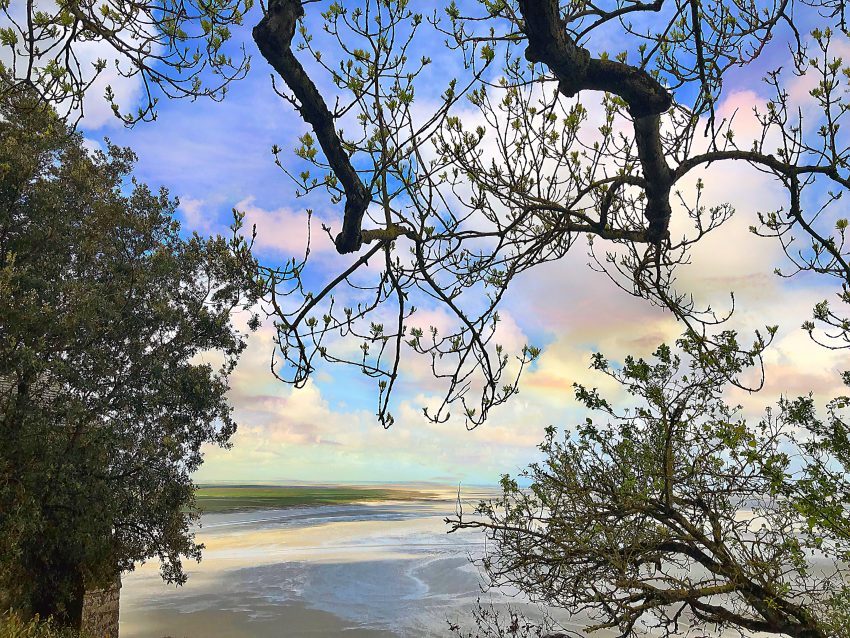 Eventually we made it to the abbey, the pinnacle of the island. It’s very beautiful, and quite an imposing structure. We learned that every stone that built it came from elsewhere – most from the UK on BOATS! Can you imagine? The abbey is still in use, and while we were touring, we got to listen in on a service, including the monks chanting. It was very otherworldly!

If you intend to go, I do recommend buying the skip the line tickets, as the line was awful. For us, we just strolled right in no problem, as we even had a separate line. While it isn’t the most impressive place I have ever toured, I am glad we went in, and took in the history and the views. We cruised through rather quickly, as we still had to bake our way back down through town, catch the bus, and get back over to our meeting point. The tours/shuttle trips only allow you about 2 ½ to 3 hours at Mont St. Michele, and time goes pretty quick! 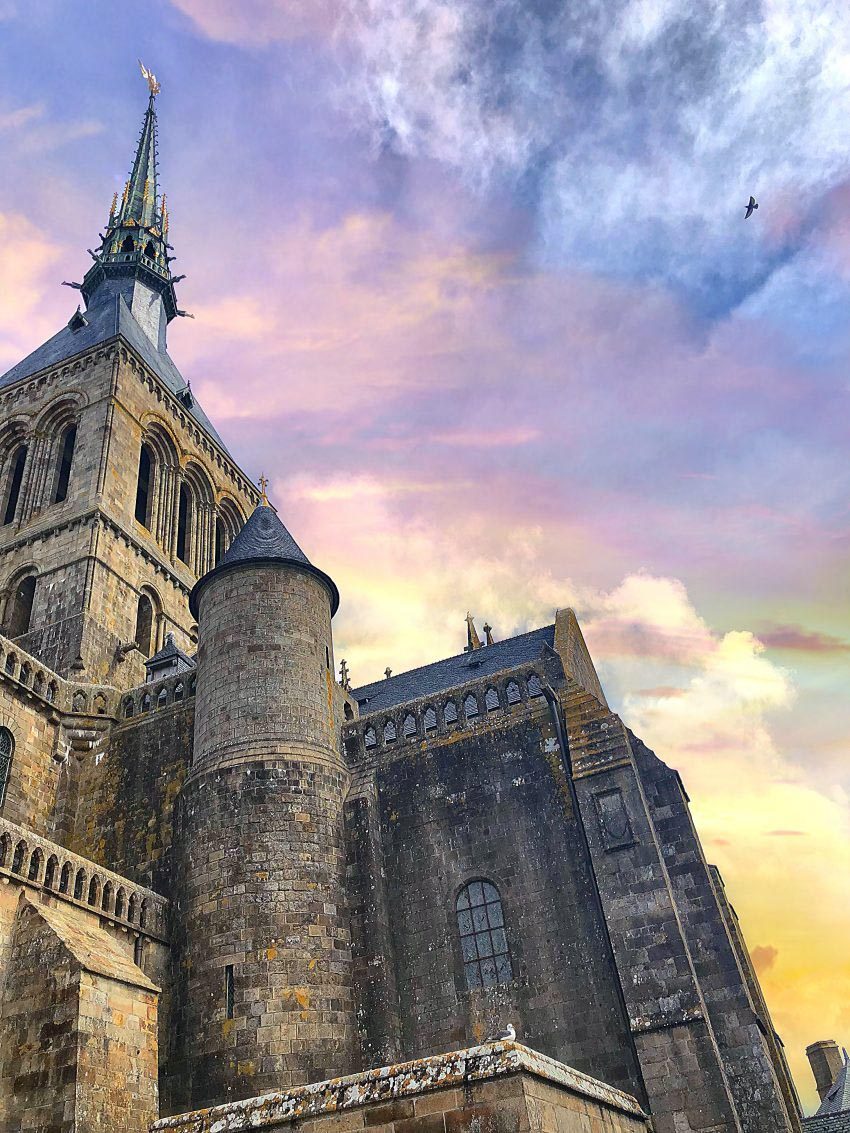 We did have time to stop and enjoy the PopArt Cow exhibit near the shuttle lots, something I enjoy. I have collected the PopArt mini-cows for a few years now, so of course, I loved looking at them. I think Rust thinks I am broken in the head, but, he puts up with me anyway.

A bit later, we boarded our van and headed back to Bayeux, arriving around 4pm. Start to finish, about 7 hours, and one of our favorite parts of our France journey this year. I would highly recommend you going! I saw that there are similar day trips offered from Paris, for roughly $125 each (it’s farther, for sure!), so if you find yourself in Paris with some extra time, this could be a great excursion for you! Plus…the photo ops are outstanding! 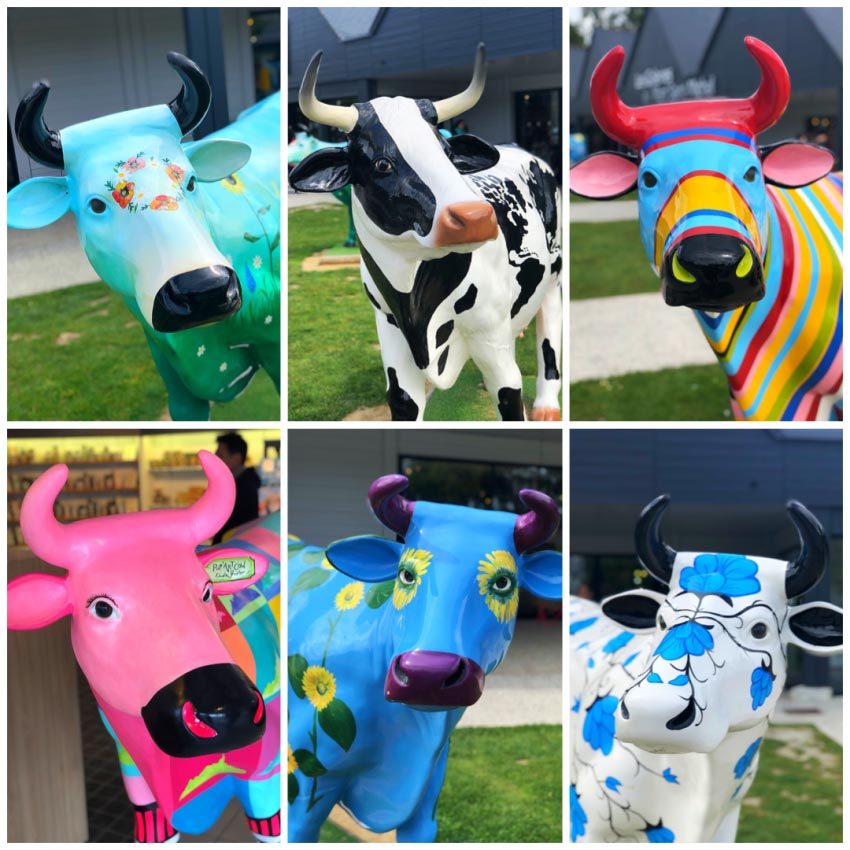 Hope you enjoyed the shots I took – I couldn’t stop!
Thanks for checking in – and stay tuned! I’ll be writing about Bayeux, Colmar, and a short stay in Paris very soon! (Everyone should get to go to Paris at least once!)
Have a great day!

Spread the love
Start Your Day Right With One of These Beverage Options Los Angeles: What You Should Know