Last month, my little family and I headed north to Pennsylvania to kick off our summer vacation.  One of the stops we made was to visit Fallingwater, one of the most iconic and recognized works of Frank Lloyd Wright.  Most people have at least seen it in photos – the linear stacked home stretching out over a creek and waterfall – whether they recognize the name or not.  I recall loving it from the first time I laid eyes on its picture.  So magical and perfect, the way it seemed to create itself from nature, taking full advantage of everything the landscape offered up. 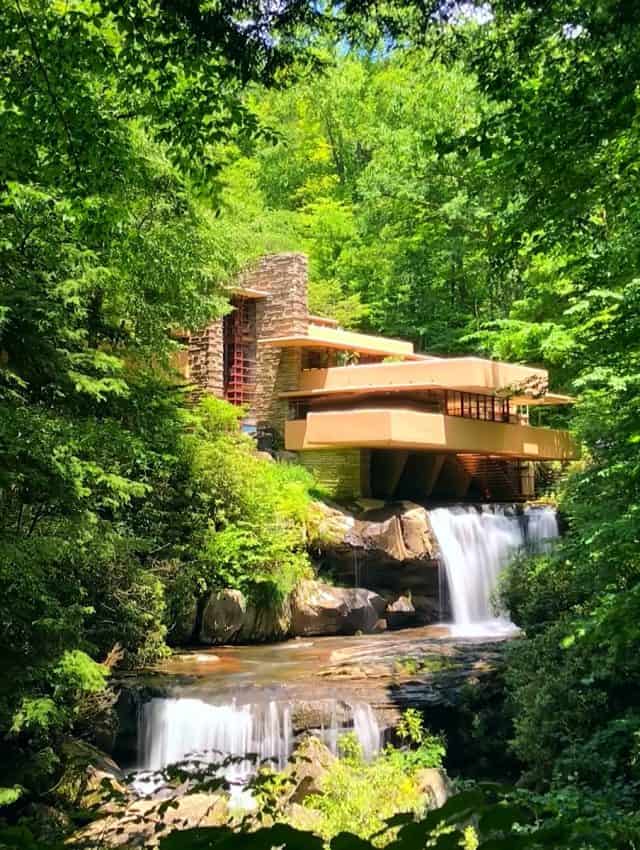 Located pretty far from any real town, Fallingwater is a scenic drive.  It’s not terribly far from Pittsburgh, but over an hour, mostly on back hghways.  The roads are rural and winding, and you wonder how on earth anyone ever decided to build a home, much less one so stunning, in what could be dubbed The Middle of Nowhere.  Nevertheless, the drive was easy and offered great scenery, and before we knew it, we arrived at the driveway leading to Fallingwater.

We parked in the very large parkinglot, and made our way to the nearby series of buildings hovering in the forest, that felt very much like treehouses.  A gift shop, full of artsy collectibles, a small café, the Visitors Center, restrooms, and museum were housed in the enclave.  After checking in to get our tickets (you need to reserve a tour in advance, as they do fill up and there is no access to Fallingwater unless you are on the guided tour), we milled about the gift shop waiting on our tour to begin. 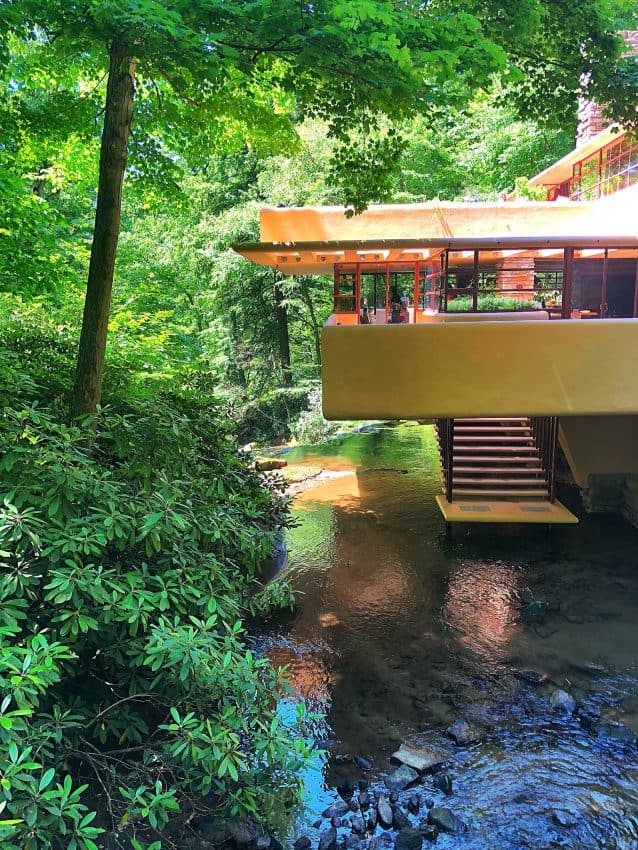 Right on time, our guide showed up to lead a group of ten of us to the house, where we were met by yet another guide who would finish off our tour.  We crossed a small bridge that offered side views of Fallingwater, from atop the waterfall.  You could see a view you don’t often find in the books, as most are views of the side where the waterfall can be seen.  The steps of the house go straight down into the creek, offering the opportunity to swim, or just dangle your feet, or simply perch and take in nature.  If I lived there, the spot on the steps would be where you found me most all of the time – it is perfection.

Unfortunately, photographs of inside the home were not allowed.  A special private tour does allow them, but not the tour most people sign up for.  So, sadly, I have no interior pictures to offer.  Instead, I will try to describe what we saw, as it was truly fascinating.

After crossing the bridge, we made our way to the entry, through what felt like a small cave.  It was serene and tranquil, but somewhat dark, and otherworldly.  It was built like this purposely, to envelope the guest.  Upon entering the home, we were guided into the large family/living room.  In current terms, we would call it a Great Room, something that homes of the 1930s did not really offer.  It was surrounded by enormous glass windows that went from the ceiling to the backs of the built in sofas.  So much glass!  It felt like a treehouse – you could see nothing but trees and hills surrounding you.  On one end, a large natural stone fireplace anchored the room, and offered a nice backdrop to the dining table.  The furnishings were very eclectic and surprisingly modern – had I not known better I would have guessed they were from the late 1960s, or 70s.  They were, however, original to the home and designed to go there by Wright.  Asian style floor cushions were everywhere, versus typical chairs, and the sofas were all built in to the walls.  Outside the windows was a huge deck – your first opportunity to see the creek and waterfall.  A small, but working kitchen was off behind the fireplace.  Again, original, and I would have guessed the 60s or 70s.  Wright was a man ahead of his time.

From the living area we went upstairs to visit the bedrooms, on two different levels.  Each had its own very modern bath, and each had a balcony to take in the views.  Cleverly designed windows opened up to take advantage of cross breezes and the sounds of the water – it was perfect. None of the bedrooms were large, as most of us desire today, but were very cozy and charming.  The sons room, on the third level was my favorite, as it took advantage of every available nook and cranny to cozy into.

From the bedrooms, we ventured outside and up the path to the guesthouse.  It was a splendid home in and of itself, and even had a swimming pool!  The water was a freezing 58 degrees – so not much chance you’d find me in it – but very tranquil and beautiful. 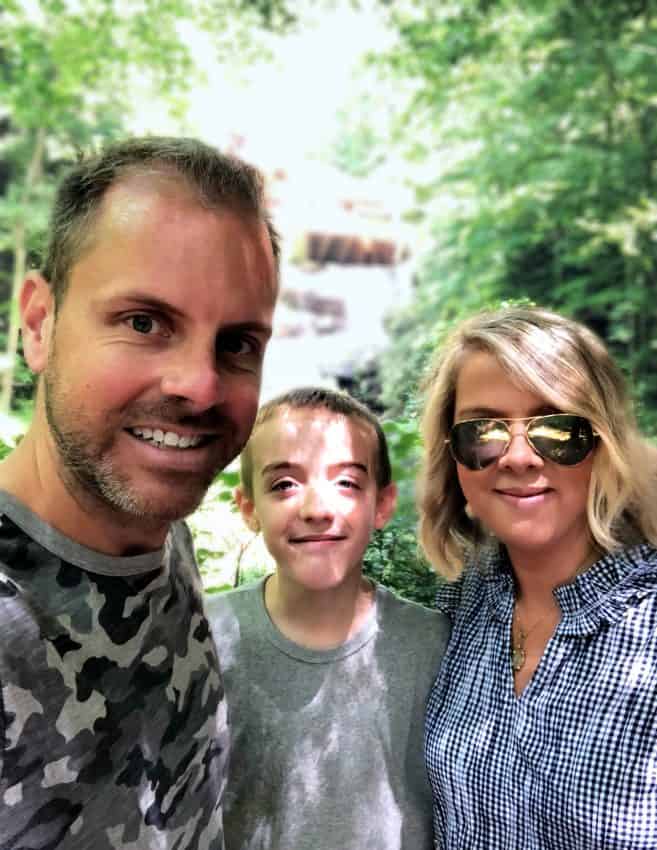 After touring the guest house, the tour was complete and we were allowed to walk the trails around the house.  It is there that you find “The View” everyone has seen in photographs.  It really is stunning, and so much better in person than in pictures.  We paid $30 each for the tour, which lasted roughly one hour, and was filled with history on the house, on Wright, and on the Kaufman family who had the house built.  Even Seven, who is 11, really enjoyed the tour, and loved learning about the home.  We still talk about it!  In fact, we’ve decided that one of these days we need to build a house that takes full advantage of its natural surroundings as well as this home does.  So, fingers crossed! 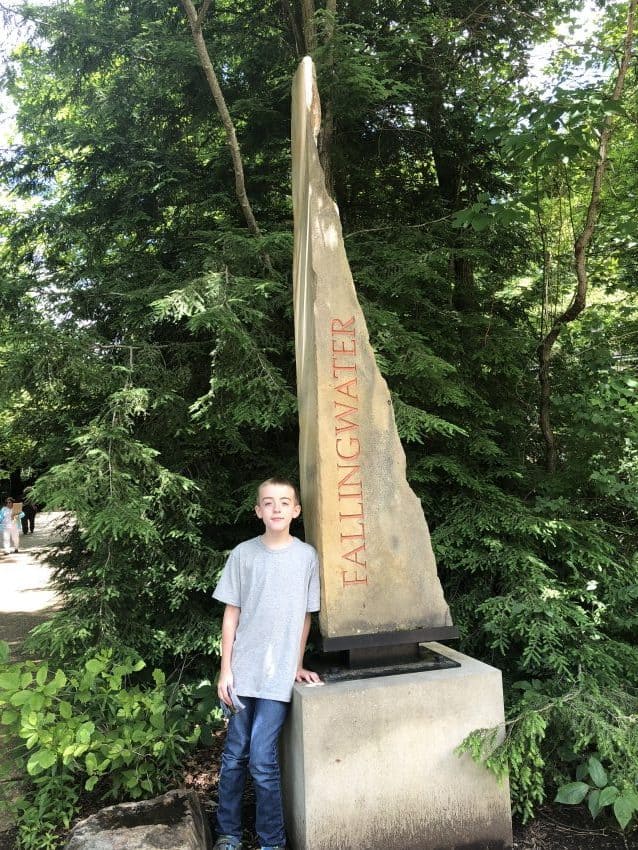 If you would like to visit Fallingwater, feel free to click this link for more details, hours, rates, and more.

And, if you are looking for lunch before or after your visit, venture onto the small hamlet of Ohiopyle.  There are several little restaurants and cafes there along the river, all offering a nice meal and atmosphere.

To see more of our travels, check it out here!

Disclaimer:  We received one complimentary tour for the visit, but all thoughts and opinions are my own.  Two of the above photos are from the Fallingwater website.

Spread the love
Lemon Meringue Cheesecake Cupcakes, for #SummerDessertWeek Where to Travel: Thirty-Somethings