Browned Butter Brownies may be my new favorite thing.  The rich, nutty flavor the browned butter adds takes an already incredible chocolate treat and turns it into magic! 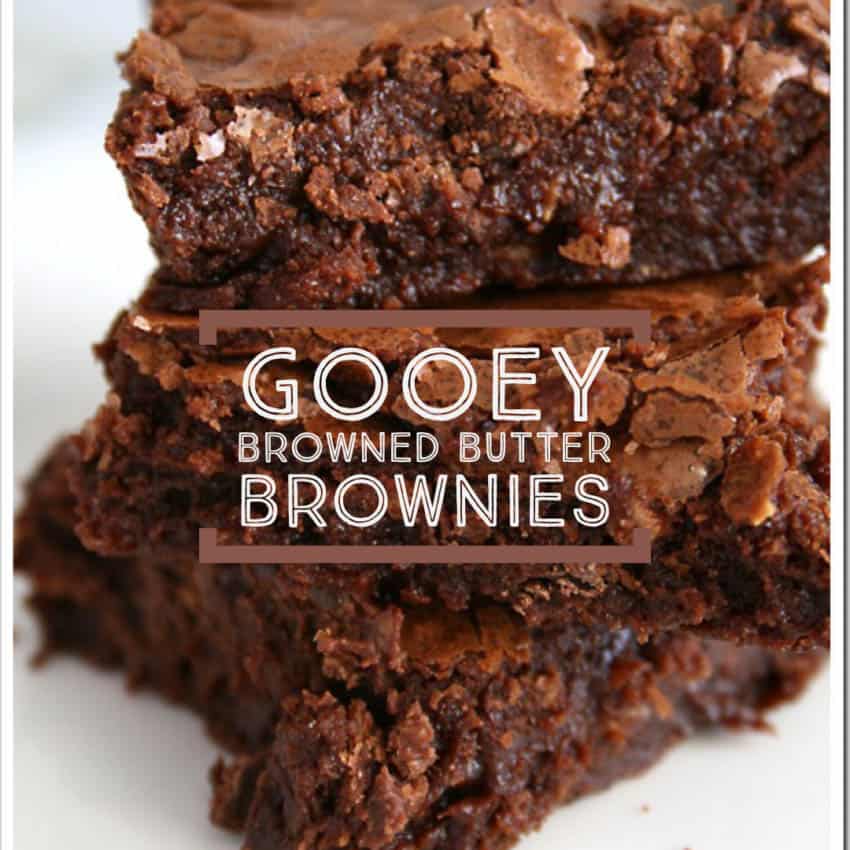 These brownies were inspired by the brownies featured on the cover of February’s Bon Appétit Magazine (which I also made, and they will be appearing on Culinary Covers), but I wanted a version without nuts. And with chocolate, not just cocoa. What resulted was the must incredibly rich, deliciously gooey masterpiece! Give them a shot! Preheat oven to 325. Line an 8×8 square pan with parchment or foil, leaving an overhang on two sides for easy removal. Spray the prepared pan liberally with baking spray, such as PAM. Set aside.

Place the butter in a small pot, and melt over medium heat, stirring constantly. Butter will get foamy, and eventually start to brown and smell nutty. Be careful not to burn. Total time should be 5-7 minutes.

Once browned, remove from heat and immediately add the sugar, cocoa, 2 teaspoons water, sea salt and vanilla. Stir to combine. Allow to cool for about 5 minutes, then add in the eggs one at a time, whisking vigorously after each addition. Mixture will become shiny and thick. At this point, stir in the flour and beat vigorously for 2 minutes. Stir in chocolate chips.

Pour into prepared pan, and bake for 27-29 minutes. Brownies will be gooey, but will firm up once cooled. Allow to cool in pan, then remove from pan by lifting them out with the parchment/foil overhang. Cut into squares.

Now, these could be whisked and beaten in a stand mixer, but I made mine the old fashioned way – by hand. It was quite a workout! I love these brownies so much that from now on, they will be my go to recipe. The richness that the browned butter adds is fantastic, and it’s an easy, uncomplicated recipe that would adapt well to what ever you might throw at it, such as candy bar pieces, mint, orange, nuts…you name it! Spread the love
It’s My Birthday…Again. What is Love?